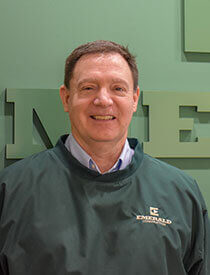 Bill is a Richmond native. He attended J.R. Tucker High School before heading to Virginia Tech where he graduated with a B.S. in Finance in 1982. Before coming to Emerald, Bill started his career working for a utility contractor. Bill joined Emerald’s team in 2011 and has been working as the controller since.

Over the years Bill has spent many days at Striker Park and the Glen Allen baseball fields. Now in his free time he can be found around Richmond playing golf or cheering on the Hokies.