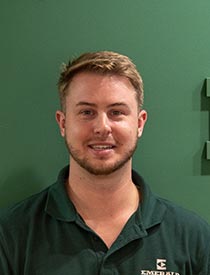 Bryce was born and raised in Virginia Beach. He graduated from Virginia Tech with a B.S. degree in Building Construction. During the summers between semesters, Bryce got his first taste of construction when he interned with a heavy civil contractor. He worked as a laborer/assistant engineer and familiarized himself with engineering responsibilities, as well as both light and heavy equipment. He worked into a role as a project engineer for a civil contractor before he joined Emerald as an Assistant PM.

Bryce spends his free time hunting, fishing, boating, and woodworking. As a newcomer to Richmond, he also enjoys exploring and trying new restaurants in town.