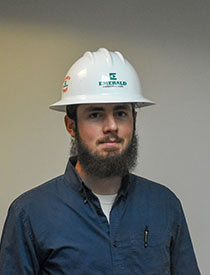 Enrique was born and raised in Richmond, he attended Godwin High School before joining the Marines. He served for 5 years, reaching the rank of Sergeant, stationed in Germany where he met his wife. Once he finished his service, Enrique and his wife traveled to Scotland, South East Asia, and even Australia. He returned to Richmond after his travels and joins Emerald as a Carpenter.