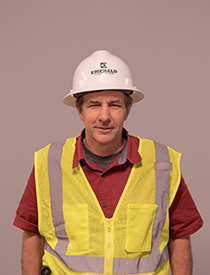 Roger was born and raised in Southern Illinois. He graduated from Ranken Technical College with a degree in Diesel Mechanics and later received a Business Degree from The University of the State of New York.  He first became interested in construction when, for a high school architecture class assignment, he designed an addition to his family home and his father hired a contractor to build it.  Starting out as a carpenter’s helper some 30 plus years ago, he brings years of experience to our team, from large multi-story commercial buildings to tenant upfits.  Roger is client and detail-oriented specializing in out of the ground commercial projects.

In his spare time, Rogers’ hobbies include sailing, ice hockey, and working on cars.